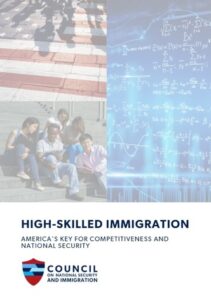 Washington, D.C. — The Council on National Security and Immigration (CNSI) today released a white paper on America’s “secret weapon”: immigrant STEM workers — those who immigrate to America to work in science, technology, engineering and math fields.

The paper details the current competitive landscape with China, which has an impact on our national security. It calls on the U.S. government to increase the number of STEM visas, among other initiatives, to ensure that America’s workforce can meet the challenges our country faces today and strengthen America’s global advantage in the future. CNSI Leaders Elaine Dezenski and Stewart Verdery also penned an opinion piece recently, in which they call on lawmakers to increase the number of visas available for high-skilled immigrants.

Below are a few excerpts from the paper. To view the paper in its entirety, click here.

Reforming the U.S. immigration system is critically urgent to strengthen U.S. competitiveness vis-a-vis China. Most STEM immigrant workers come to the United States as students. Attracted by the international prestige of American higher education institutions, approximately 1 million students each year from 193 countries enroll in U.S. colleges and universities. While there is no guaranteed path for international students to stay in the U.S. after graduation, they have a few paths to work and remain in the United States. …

Congress can take steps to address this potential STEM shortfall, modernizing the visa system by applying market-based principles to increase the number of visas for STEM immigrants while also protecting American workers. Such a simple reform would serve a twofold purpose to outcompete China. On the one hand, it would allow the United States to attract the brightest minds to our country. In turn, it would increase the quality and quantity of high-skilled research and development (R&D) on American soil. On the other, it would create the appropriate conditions for Chinese entrepreneurs and engineers to develop their ideas in the U.S., to the detriment of China. …

One of the guiding principles of the Council on National Security and Immigration (CNSI) is to prioritize immigration policies and administrative structures that strengthen our economy and advance our national security posture, including ensuring that “the United States remains competitive in the ongoing, strategic competition with China.” We encourage the U.S. government to put in place “forward-thinking immigration policies and administrative structures that encourage innovation and attract, welcome and retain high-skilled foreign nationals and entrepreneurs.”

To discuss STEM Visas with a member of the Council on National Security and Immigration, please contact CNSI@monumentadvocacy.com