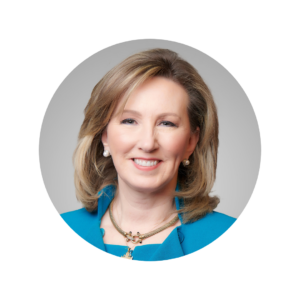 Barbara Comstock, senior advisor with Baker Donelson, offers clients decades of policy experience in the legislative, administrative, and private sector arenas, as well as a lifetime of relationships, to build winning coalitions and strategies for clients in today’s challenging policy and political environments. She’s active in the technology and cybersecurity areas, national security and space, and congressional investigations.

Barbara was elected to Congress in 2014, and served two terms representing Virginia’s Tenth Congressional District, making her the first woman elected to that seat. She was named as one of the “Top Ten Most Effective Lawmakers” in the 115th Congress by the Center for Effective Lawmaking, a joint effort of the University of Virginia and Vanderbilt University.

During her time in Congress, Barbara was a leader on technology and cybersecurity issues, chairing the Science, Space, and Technology Committee’s Research and Technology subcommittee, as well as serving on the Joint Economic Committee, the Transportation and Infrastructure Committee, and the House Administration Committee. Her legislative achievements include passing legislation to promote women and disadvantaged populations in STEM, as well as expanding research in the technology space. Barbara also was the leader on anti-sexual harassment legislation in Congress, and legislation to tackle the opioid crisis and gang crime. She partnered with Senator McCain to reauthorize multi-year firefighter grants to increase innovation and public safety. While in Congress, Barbara was the only woman in the Virginia congressional delegation and the only Virginia member to chair a subcommittee.

Prior to serving in Congress, Barbara served as a Member of the Virginia House of Delegates. There she was also a leader on technology issues serving as chairwoman of the Science and Technology Committee. She also served on the Commerce and Labor Committee and the General Laws Committee. Barbara was a go-to leader in technology, authoring and passing legislation such as the Research and Development Tax Credit, Data Center Tax Incentives, the first Telework bills in Virginia, and legislation on human trafficking and health care. She received the Virginia Chamber’s Free Enterprise Award and Competitiveness Award.

Prior to elected office, Barbara co-founded her own public affairs firm and was a senior partner at Blank Rome Government Relations. She also served as Director of the Office of Public Affairs for the U.S. Department of Justice, overseeing the communications efforts at the Justice Department and FBI, handling communications dealing with major terrorism investigations, corporate fraud, and antitrust matters.

Barbara worked as a strategic advisor for the Mitt Romney presidential campaigns, was head of Research and Strategy at the Republican National Committee, and worked with the George W. Bush 2000 presidential campaign. Barbara first worked on Capitol Hill as a senior aide to Virginia Congressman Frank Wolf (1990 – 1995), working on transportation, health care, business, and appropriations matters. She also served as the Chief Counsel for the House Oversight and Government Reform Committee and as outside counsel on numerous high-profile investigations.

In 2013, Barbara founded “The Young Women’s Leadership Program” for women in high school and junior high, which is now housed at the Barbara Comstock Institute for Women in Leadership at George Mason University’s Schar School of Policy and Government.

Barbara regularly appears on network and cable news shows such as “Meet the Press,” “Fox News Sunday,” CNN’s “State of the Union,” and others as a commentator on political and policy issues of the day.