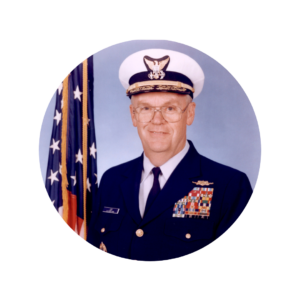 In 2005, Admiral James Loy completed a 45-year career in public service, retiring as Deputy Secretary of Homeland Security. In this capacity, he was involved in all aspects of consolidating 22 separate agencies into one unified Cabinet department as well as managing the day-to-day activities of the agency.

Prior to the establishment of the Department of Homeland Security in 2002, Admiral Loy served in the Department of Transportation as Deputy Under Secretary for Security and Chief Operating Officer of the Transportation Security Administration (TSA), and later as Under Secretary for Security. In these roles, he served as the first administrator of the newly created TSA, which is responsible for protecting the Nation’s transportation systems to ensure freedom of movement for people and commerce.

Admiral Loy retired from the U.S. Coast Guard in 2002, having served as its Commandant since May 1998. As head of the 90,000 person organization, he restored readiness through workforce development and modernized the Coast Guard’s fleet of ships and aircraft.

Prior to his service as Commandant, Admiral Loy served as the Coast Guard Chief of Staff from 1996 to 1998, during which time he redesigned the headquarters management structure and overhauled the Coast Guard planning and budgeting process to focus more sharply on performance and results. From 1994 to 1996, he was Commander of the Coast Guard’s Atlantic Area, supervising U.S. forces during the mass Haitian and Cuban migrations of 1994, and leading Coast Guard forces participating in Operation Restore Democracy.

A career seagoing officer, Admiral Loy has served tours aboard six Coast Guard cutters, including command of a patrol boat in combat during the Vietnam War and command of major cutters in both the Atlantic and Pacific Oceans.

His military commendations and civilian honors are numerous, including the Department of Transportation Distinguished Service Medal; four Coast Guard Distinguished Service Medals; the Defense Superior Service Medal; the Bronze Star with Combat “V”; the Combat Action Ribbon; the Naval Order of the United States’ Distinguished Sea Service Award, the Seaman’s Church Institute Silver Bell Award, the Navy League prestigious Admiral Arleigh Burke Leadership Award, the Intrepid Foundation Lifetime Achievement Award, and many other distinctions. Admiral Loy graduated from the U.S. Coast Guard Academy in 1964 and holds Master’s degrees from Wesleyan University and the University of Rhode Island. Admiral Loy is a member of the Board of Directors of Lockheed Martin and RIVADA Networks, Inc.

Admiral Loy is a native of Altoona, Pennsylvania.